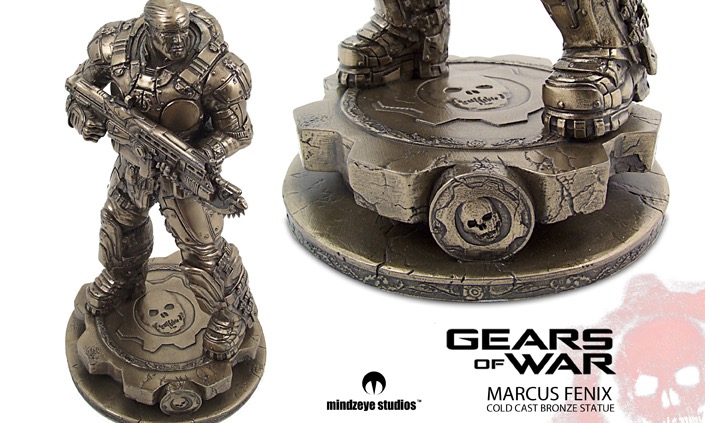 About Gears of War™

This popular third-person tactical action/horror game—was developed by Epic Games exclusively for Microsoft Game Studios and the Xbox 360® video game system.  The story of “Gears of War” thrusts gamers into a deep and harrowing battle for survival against the Locust Horde, a nightmarish race of creatures that surfaced from the bowels of the planet.

Players live and breathe the role of Marcus Fenix. As Marcus Fenix, you fight a war against the immense Locust Horde, which not only out powers but outnumbers you, your squad, and the entire force of the Coalition of Ordered Governments. A disgraced former war hero, Marcus seeks personal redemption as he leads his fire team against an onslaught of merciless warriors from below.

This version of Marcus Fenix may be purchased from Mindzeye Studios.

Known for sculpting some of the most lifelike, detailed statues on the planet. All Mindzeye Sculptures are limited to 1000 copies and come with a Certificate of Authenticity. Immerse yourself in the intense, detailed world of Mindzeye.

You can also find additional detailed images of this sculpture on their site.