Born in Washington D.C. in 1971 Karl is the son of Army Colonel Dr. Daniel T. Sanders and Mrs. Gay Sanders. In 1980 when his father retired from the army, Karl and his family moved to Louisiana.

It was Karl’s mother who first recognized his burgeoning talent’s as an artist. He began drawing at a very early age and his mother encouraged him and got him admitted into art classes at the age of nine. By twelve years old his mother found a portrait class at Bossier City Community College where he was first introduced to Classical anatomical proportions.

Suffering from severe allergies, Karl spent most of his elementary and junior high school years in homeschooling. This relative isolation created an environment where Karl’s artistic ability could blossom.

Due to time missed from high school, Karl decided to take the GED and passed at age 15. Thereafter, he attended Louisiana State University in Shreveport. He began in pre-med, which certainly contributed to his keen grasp of anatomy, but later switched to Fine Arts as his major.

Don Alexander, then Dean of the Art Department at LSU-S, recognized the potential in Karl and encouraged him to pursue art as a career and to apply for admission to the prestigious Art Center College of Design in Pasadena, California. Karl spent the next two and a half years developing a portfolio to gain admittance into this highly competitive program.

Karl was accepted into the Art Center as an Illustration Major. It was while studying the human figure in the rigorous foundation program there that Karl was introduced to the world of sculpting. While attending an advanced portrait class the instructor required the students to sculpt a bust of a live model over the course of four weeks. At a school surrounded by incredibly talented students, it was very difficult to stand out in any discipline but comparing this first sculpture attempt to those of his peers it was immediately apparent he had a uniquely natural grasp of sculpting. He fell in love with this medium.

It was between his third and fourth semesters that what he thought was a tragedy at the time occurred. He was on break and visiting his family in Louisiana when his car was stolen with everything he had drawn and painted over the past year and a half. Literally hundreds of figure drawings he had executed from live models. This was a blessing in disguise.

He took a semester off after this incident and decided to teach himself how to sculpt the human form. He spent three months in his apartment sculpting an 18” human figure starting with a fully detailed skeleton then adding muscles and finally skin. He would later learn that this was the classical technique of “Ecorche” used by classical artists for centuries.

For the rest of his college career, he worked with his instructors to apply sculpture content to assignments. This was not easy, as wonderful and creative an environment the Art Center was, it did not have a sculpture program. By the time Karl graduated he had an Illustration portfolio as well as a Sculpture portfolio.

Following graduation, Karl began a successful period working in the film industry. After a few years, Karl was hired as one of five in-house sculptors for the world-renowned Franklin Mint. While there, he honed his skills and executed several high-profile projects.

Karl’s professional career has now spanned seventeen years. For the past fourteen years, he has been working as a freelance sculptor and designer. His clients range from action figures and figurines to life-size or larger installations.

Though still doing occasional commissions and selected projects, Karl Deen Sanders has now embarked on a new path. His artistic vision and integrity have taken him to the highest level of achievement in each endeavor he has attempted. His artistic range and diversity make him a true Renaissance man. From a youthful vision has grown a succession of mature, visionary work that has made Karl Deen Sanders one of the foremost Sculptors working today. 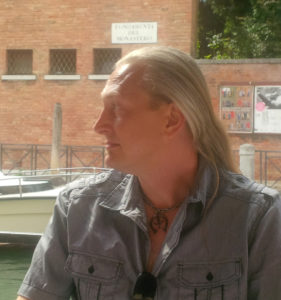 Karl is currently living in Thousand Oaks California with his gorgeous wife and two brutally adorable dogs. He is now focused on developing original Human Figurative sculptures cast in Bronze. Stressing anatomy, movement and always beauty his sculptures are timeless works of art.